There is something about sitting by a campfire that soothes. There is something about sitting by a campfire with an instrument in hand that imbues. Yesterday we lit the firepit— a nice addition to our lovely home, complete with a grilling top— and grilled up tons— 5-6 pounds, really— of meat. We like having food for the days ahead. After dinner, storytime, teeth brushing, after the kiddos went off to bed, as the sun went down, I went out with my mando and sat by the simmering coals. Just enough warmth and light.

And I sat in awesome wonder.

June 24th was a major victory. A battle won in a war long-waged. Just one victory— albeit a large one— in a war that is not over. But that is just the background, really. That victory is not ours, it is not a moment to pat ourselves on the backs. As Bill Maher’s guest stated clearly, this was just luck. A “happy accident”. Had Ruth Bader Ginsburg retired under Obama, this may not have happened. Had Hillary Clinton won in 2016, this may not have happened.

Here we are. A “happy accident”, just luck.

But the world does.

When I look at your heavens, the work of your fingers, the moon and the stars, which you have set in place, what is man that you are mindful of him, and the son of man that you care for him?

One of our elders at church preached yesterday morning from Psalm 8. Two words are used in verse 4 to describe mankind. “What is man (enosh)” and “the son of man (ben adam)”. Enosh often points to our mortality and frailty, while ben adam means “son of dirt”.

All go to one place. All are from the dust, and to dust all return.

In Genesis, the Creator makes us from dirt. Adam, the name of the first man, is literally dirt, which the Creator breathed life into. And the world doesn’t believe much different today. Our universe is one big accident. Your very existence is a chain of events, not driven with purpose, but with no direction whatsoever.

And your life? Meaningless.

The world has no definition of what life is. When it begins. When it ends. What is in between the beginning and the end is without meaning. Enjoy it while you can, get out of it what you want, and expire into the nothingness at the end of this.

It’s no wonder that the world rages against anyone that says that one shouldn’t live a specific way or enjoy certain pleasures. Why stop one from doing so? It’s all meaningless anyway. The void doesn’t care.

For you formed my inward parts; you knitted me together in my mother’s womb. I praise you, for I am fearfully and wonderfully made. Wonderful are your works; my soul knows it very well.

You weren’t made without purpose. You are not an accident. Nothing is. Our Lord, the Maker of the universe, the Creator of the stars and worlds untouched, the One that knows the number of hairs on your head, yet holds the Sun in his hand: He made you for a reason.

Oh Lord, my God When I, in awesome wonder Consider all the worlds Thy hands have made I see the stars, I hear the rolling thunder Thy power throughout the universe displayed

I sat by the fire last night. Awesome wonder. As darkness crept over the earth. I considered. As the light of my fire glowed. My soul sang. His majesty is great, His power mighty, and His sovereignty complete. He has a plan. Every step is known. And He is owed the glory.

O Lord, our Lord, how majestic is your name in all the earth!

LifeHacker has a great article on how to automatically donate a portion of your Amazon Purchases to pro-abortion organizations, so I thought I’d share it with a little help for those of us disgusted by the killing of babies and want to help women and children in need out.

If you’re an Amazon customer and you’re disgusted with the onslaught of [babies], you can set your account to directly support [pro-life] organizations.

Through Amazon’s “Smile” program, you can choose from more than a million non-profit organizations that are qualified to receive a portion of Amazon’s sales in support of their mission.

The AmazonSmile Foundation donates .5% of the purchase price from eligible orders (that’s 50 cents for every $100 you spend), which admittedly is not much. But it does add up; Amazon reports that charities have received nearly $125 million, as of February 2019.

To set up your Smile account, go to the “Accounts and Lists” drop-down menu on Amazon’s homepage and then click “Your AmazonSmile.” From there, you can’t browse a full list of charities, but you can search for an organization to support by entering its name in the search field.

If you are in the Saint Louis area, I highly recommend searching for “Mosaic Pregnancy & Health Centers” in Granite City, Illinois, a great local organization that helps women.

When you’re placing an order, eligible products will be marked “Eligible for AmazonSmile donation” on their product detail pages. For your order to count, you have to place it through smile.amazon.com rather than the regular Amazon homepage.

Go make a difference and support women and children in tough situations.

Does Gender Determine Whether You’re More Likely To Be Pro-Life?

Many U.S. political leaders may think of abortion as a key “women’s issue,” but it is not an issue about which women have substantially different attitudes than men.

44% of women identify as pro-life. Look at the comment threads on major news pages and you'll see just as many women as men speaking out against abortion and in support of these recent heartbeat laws.

Gender is not an indicator of whether one will support abortion or not. Worldview is. Religion is.

Don’t let the talking heads stir up a division that doesn’t exist.

Missouri’s Abortion Bill and Down Syndrome

This morning I’m reading more about our neighbor state’s abortion bill, which passed the Senate last night. This part makes me so happy to see:

Other provisions in the wide-ranging abortion bill include a ban on abortions based on race, sex or a "prenatal diagnosis, test, or screening indicating Down Syndrome or the potential of Down Syndrome."

Outlawing the systematic eradication of children with Down Syndrome is one of the most appalling things going on in the US. We literally have tests early in a pregnancy to detect potential “defects” that then the doctors use to persuade mothers to kill their children. This bill outlaws that practice. I couldn’t be happier.

Seeing the outrage reminds me of how outraged individuals were over losing the right to own slaves.

A lawless president has inspired lawless legislatures. Our laws are crystal clear the government cannot come between a [man] & [his property].

[This] will cost Alabama [men] their [livelihood], and threatens the [property] rights of [men] across the country. We must fight back, and our next president must act to enshrine [slavery] into law.

57% of voters think [slavery] should stay in place, poll says

You know what? Sometimes the law is morally wrong.

Slavery was legal. 100%. No question. It was legal. But it was morally wrong. So we fought to overturn that and free slaves to give them the same rights we held to be self-evident.

This article, on so many levels, is a must read.

One hundred fifty-two years after our nation enacted the thirteenth amendment prohibiting slavery the same excuses used to justify slavery are now used by those who would defend abortion. “Property” has become “body,” but otherwise the same arguments are used to deny humanity to humans in order to treat them as less than human. Modern America has just graduated from the trading of bodies to the trading of body parts.

Recounting the popular advice in ancient Rome, Jerry Toner of the University of Cambridge noted Romans of the day advised, “Giving birth to many children does not mean you should keep them all. If you are poor and do not earn enough to be able to support your family, you should throw away weak infants at birth. A child does not become a full human being until the eighth or ninth day when the father has accepted it into his household.…So if your wife does produce an unwanted child, you should instruct her to abandon it at the town dump or by the roadside so the slave-dealers can pick it up.”

Christians were declared enemies of humanity by Roman emperors because, in part, they would collect the discarded babies from the town dump and raise them as their own. Likewise, they would refuse abortions. Two thousand years later it was Christians who took up the cause of abolition and now Christians again seek the abolition of the newest stain on our constitution.

We must end this stain. Every child has a right to life. Every last one.

The legislation, which passed 238-183, would make the Hyde amendment permanent. The amendment, which has been added to spending bills for decades, bans any federal funding from being used to provide abortions.

In addition, it would target Obamacare plans that cover elective abortions. It would not provide Obamacare customers with subsidies used to pay down the cost of insurance if the insurance plan covers abortions.

And before you claim that this is preventing women from having access to abortions:

The bill, authored by Rep. Chris Smith, R-N.J., would not affect an Obamacare customer who does not receive taxpayer-funded subsidies.

The Hyde amendment was one of the things the Hillary Clinton wanted to be overturned. Just like Margaret Sanger intended, lower-income and largely black populations are the targets of the abortion industry. Allowing taxpayer money to fund these is a pipe dream of Sanger, who Clinton admired enormously.

Now let’s pray this passes the Senate and we can end another loophole for taxpayer funding of abortions.

What changes a "clump of cells" into a baby? 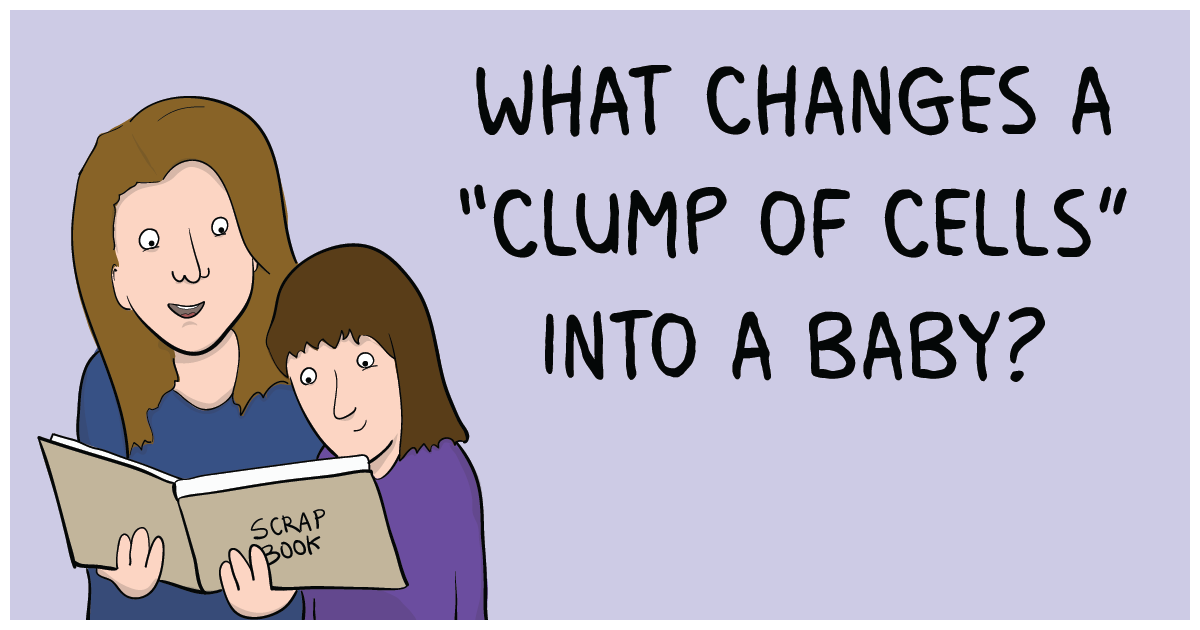 Does Abortion Only Represent 3% of Planned Parenthood’s Services?

No. This is a misleading number. Because statistics can easily lie.

Publish Widely the Story of the Cross

Over the last couple months this blog has been lighter on original content, largely because of our move to St. Louis. Even with a lighter publishing schedule, I have been publishing a lot of links and videos on grim matters and on matters of hope. My heart has been broken time and again over the last couple months as information has come out about the practices of Planned Parenthood. In these dark times, we must keep our eyes on the Cross.

Hope. Many people are seeking it. Some Christians have lost it. The tricky thing is to recognize where you find it. Hope found in the world will always fail. Hope found in the power of the Cross, in the Blood of Jesus, in the eternal life to come will never fail. While the total depravity of our world is heavy, I find hope in the One that can overturn the sinful nature of the hearts of Man.

This for me is why I do not keep my words, my faith, the Word of God to myself. Keeping this hope, this blessèd assurance, to myself would be the greatest form of hate and selfishness. So I publish. Many will be offended. Many will unfriend me, unfollow me, or cut off all communication with me. But many more will see hope for something better than this fallen world.