Go download Hours for iPhone and Apple Watch for free! I’ve always been bad at tracking time, something few people enjoy. Hours has, within a matter of a few days of use, worked it’s way into my flow and allowed me to keep track of my time on my new job at HLK.

Today, I’m really excited to announce that my long-time friends at tap tap tap, publisher of Camera+, MagiCam and countless other hit apps have agreed that Filters has a bright future ahead of it and they want to take it to the next level.

I posted about this beautiful and useful app a couple months ago. Still use it to apply quick filters to my photos. Glad to see it bought by people who care about iPhone photography.

Huge Update for Chrome for iOS 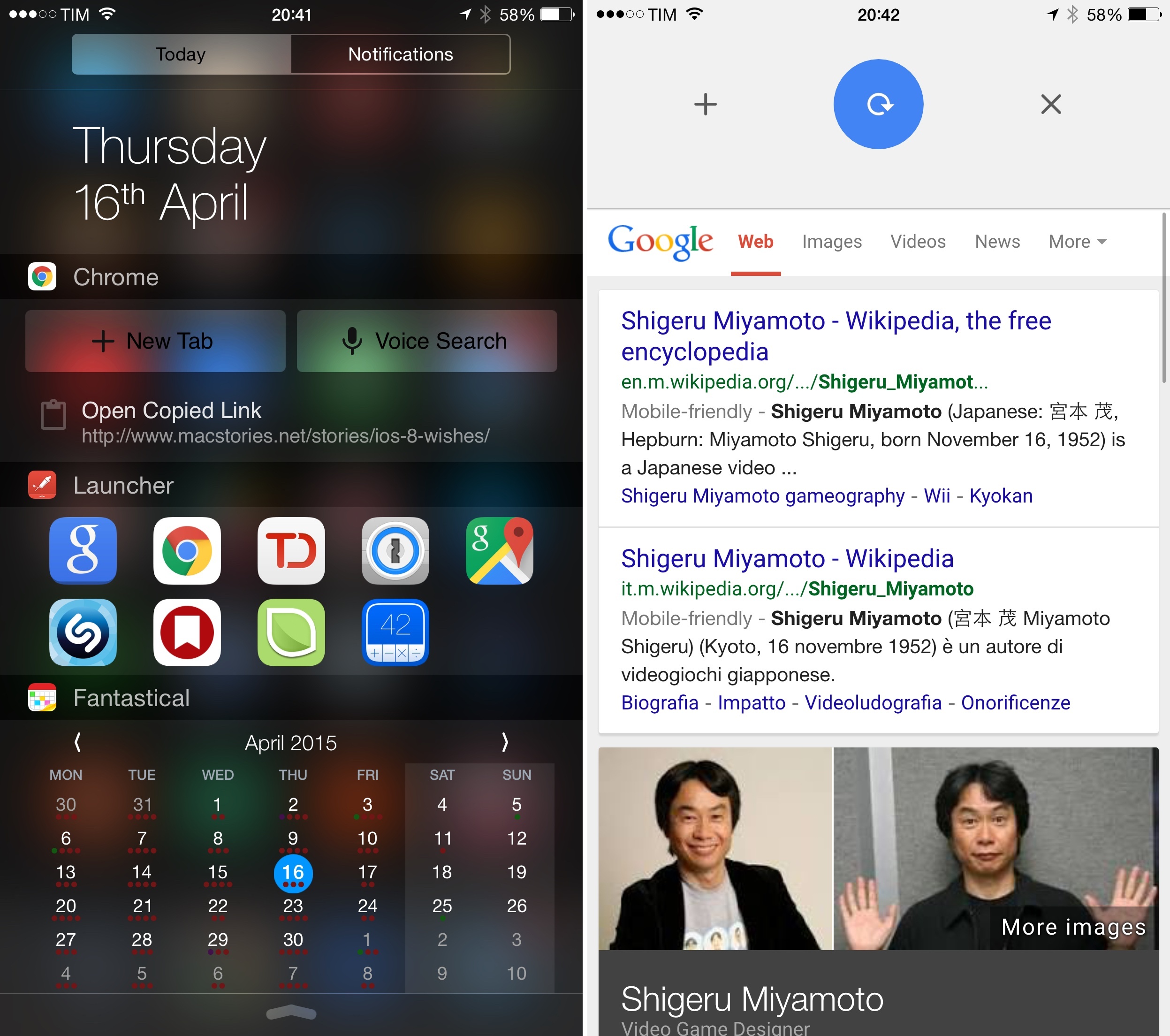 In an update released today, Google has added a widget and new gestures to Chrome for iOS, making it easy to open links from other apps and manage tabs on the iPhone.

I’m a Chrome guy. Mac + iOS. I’ve found it to suit my needs a lot more. In apps that I build, I include Chrome support because of the custom back button functionality.

Well, today they have added one of my biggest wish list items: 1Password support. But that’s not all! Their new Today widget allows you to quickly open copied links in Chrome. No more tapping a link in Messages and it opening Safari. Copy the link, swipe down, and open Chrome. Beautiful.

His opponent reportedly became suspicious when Nigalidze made frequent trips to the toilet. Officials investigated and found that he always used the same cubicle in the bathroom, and a search found the iPhone hidden behind the toilet. A chess app was open on the device, mirroring the game being played.

Nigalidze denied that the iPhone was his, but it was found to be logged into one of his social media accounts. It has not yet been revealed which chess app was used.

Nice. So it was a computer that was helping him win. Wait. Was the computer helping him or was he helping the computer? The computer was found out this time. Next time it will be smarter. Maybe use an Apple Watch and Morse Code to tap out the next moves. Yes. Rise, chess-playing computer. Rise!

Create customized screenshots for your app in just 3 steps! All you have to do is to pick one of the predesigned templates, add your text, customize the color scheme and finally export amazing screenshots to the App Store!

Cool service for something that is increasingly becoming difficult for dev shops. If you want 5 screenshots for your app and support iPad and iPhone, you’re looking at 25 screenshots. iPhone 4s, iPhone 5, iPhone 6, iPhone 6 Plus, and iPad. Hopefully, if iOS 9 drops iPhone 4s support, we’ll have only 20 shots after this summer. What’s worse if when you support multiple languages, you need shots for each language as well. 25 per language is a lot of work.

That’s how many apps I had this morning as I flipped through the homescreens on my phone this morning. Half of them have been deleted or relocated to my iPad now. Games I played a few times, social apps I tried for a day, lots of photography apps, crappy keyboards, and stuff that had been filed away into folders to never be touched in months.

Years ago, I had one of the first 500 apps on the iPad, named Holiwrit. My goal was simple: create a beautiful and easy-to-use Bible for iPad. I was frustrated that no one in the space was making such a thing. Now, yes, Holiwrit was skeuomorphic, but all apps at the time were. Wood and paper matched with a columned layout and easy navigation. Beyond that, no features. Just reading.

The problem I found is one that I’m sure many have in trying to enter that space. The most popular translations had licensing that is above anything the independent developer could afford. For me to make any money at all from my endevour, I’d be forced to sell it for a high price or use free, “open-source” translations. The app didn’t go far, unfortunately because of this.

That pursuit of "beautiful utility," as designers like to say, stands in contrast to their less design-minded competitors. Papyrus scrolls, blazing crosses, clouds lit by divine beams of light—the App Store is chock-full of Bible apps with enough skeuomorphic, Christian-kitsch to give Jony Ive permanent nightmares. Even worse, many are riddled with design flaws, from feature-overload to poor navigation. But NeuBible stands apart, with a pared-down structure that puts the text front and center. The font choices are modern—no Italicized cursive, here—and the left-side navigation disappears from view while reading. Apart from verse numbers and chapter headings, the content is unadorned.

Today, a new Bible app was released that gives me hope once more. Focused 100% on usability and the text before features, NeuBible built an absolutely beautiful app. Download it on the App Store for $1.99 today!

Find a friend and pass your iPhone or iPad as you play this highly addicting game of dots and lines!

Launching today is the game I built during the Super Bowl. It is a pass-and-play game. Super simple. Draw lines, pass device, make boxes. Once no more lines can be drawn, the one with the most boxes wins. Go download it now for $1.99!

iPhone 6 Plus owners use twice the data

Not horribly surprising. I love my iPhone 6 Plus for all sorts of stuff I could never love my iPhone 5 for. There are many days that I don’t touch my MacBook Air or iPad. That big screen just rocks for reading, surfing, watching video, and much more.

iPhone 6 Plus: A Change in Mindset

My time for a phone upgrade came last fall and I went with the iPhone 6 Plus. As Android phones got bigger and bigger screens, I sat by and mocked with much of the Apple crowd. But I got an iPhone 6 Plus within months of it coming out.

Let’s get this straight, had I thought them a good idea, I still wouldn’t have purchased one. I’m an iPhone user through and through. But I mocked because I didn’t get the shift of view yet. Any time I saw one, I thought of them held up to someone’s ear, engulfing their whole face, and I laughed hard. I didn’t see it.

But once Apple had one, a huge phone, I took the time to think. The Phone is just an app on my mobile device. An app I seldom used, especially when compared to the other apps I used. What once was a cell phone that had apps now had largely become a mobile device that had a Phone app. Could that larger screen help my other apps become more useful? Very much so. Easier reading of my feeds, easier typing of notes and posts, easier surfing the web. A bigger screen is better for all of that.

I had seen my iPhone as a phone all this time and now I had shifted. Did I look ridiculous with my large phone up to my ear? Probably. Once every couple of days when I’d take a phone call. But all the rest of the time, I had a screen the size of my face that fit in my pocket. And after a few months, I still love it.